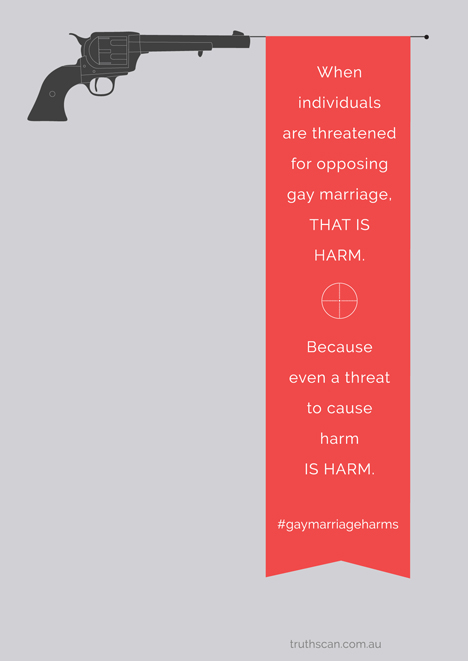 Note: All links mentioned on this page have been accessed on 7 November 2015.

Same sex marriage won’t harm anyone – that’s the standard response trotted out by gay activists and those who are pro gay marriage. They present their cause as one that is humane and righteous, conducted on behalf of those who are suffering the evils of intolerance and discrimination. However, you don’t have to look very far to see that the gay marriage movement is itself highly intolerant and discriminatory, threatening to destroy anyone who stands in opposition to it.

Take the following cases that have occurred in Australia alone.

A bakery in the Adelaide Hills was threatened with a boycott because one of their owners wrote to the local newspaper complaining about it’s pro-gay stance.

Victoria’s deputy chief psychiatrist had to resign from Victoria’s Equal Opportunity and Human Rights Commission owing to his opposition to gay marriage.

A school in New South Wales “not only cancelled two school periods to facilitate the screening of an overtly political documentary on homosexual parenting to all students this Friday but urged all pupils to wear purple in support of LGBTIQ (lesbian, gay, bisexual, transgender, intersex, and queer).”

Add to these incidents the numerous cases against bakers, photographers and B&B owners who have declined to offer their services to gay couples, and it’s amply clear that gay marriage harms those who are opposed to it. And then, of course, there is the high profile case of Brendan Eich, CEO of Mozilla who was forced to resign because of a donation he made to an anti gay marriage campaign.

In other words, don’t be fooled.

And history is witness to the harm that totalitarianism is capable of.

Truth deserves to be shared!